Please Give a Big Warm Welcome to 2021

We made it to 2021! I hope your New Years was fantastic even if it was at home on your couch. This extrovert didn't mind staying home to ring in the new year. We saved money, didn't have to deal with crowds and I could wear my pjs the whole night. Sounds like a win win to me. 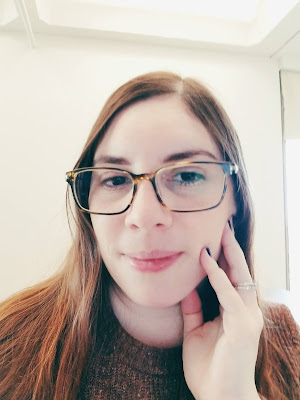 Now the holidays are over and it's back to work. I think we can all agree that no one wanted to go back to work on Monday.

I bought a new planner for 2021. It's a blank one where you fill in the dates which is great since most of the planners I did find started in the summer of 2020. As someone who's very into journaling right now you would think I would jump on the bullet journal trend. I just haven't been able to muster the energy for that right now. A simple planner should work out just fine for me. 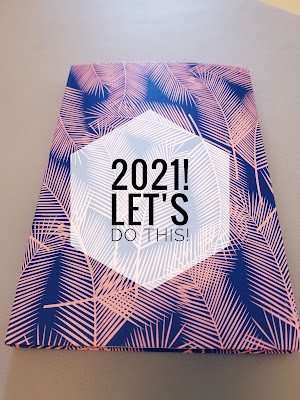 I usually don't set specific new years resolutions. I like to think of things I want to improve or focus on for the new year. This year I'm focusing on reducing my anxiety and being more creative.

Tell me how you celebrated the end of 2020 and what you're looking forward to in the new year.

Where have I been

Took a bit of an unexpected blog break. A lot has happened since the summer. After weeks of working from home in a small one bedroom apartment, we decided to buy a house. Apparently we weren't the only ones who had this idea. House hunting is stressful and I really don't plan on doing it again any time soon. I wasn't prepared for how emotional it would be to lose out on a house and we lost out on a few. One house we lost out on because the seller's agent was "overwhelmed" with the amount of offers and picked one to show to his seller because they had a dog. Our offer was higher and we could have gotten a dog! I don't think the seller's know they weren't presented with the highest offers. Talk about a bad agent. That house wasn't meant for us but at the time it stung. We stayed in our price range and the house we ended up with has most of the features we were looking for. We closed in October and are slowly getting things in order. Yes there are still unpacked boxes. I fully admit to being a procrastinator. 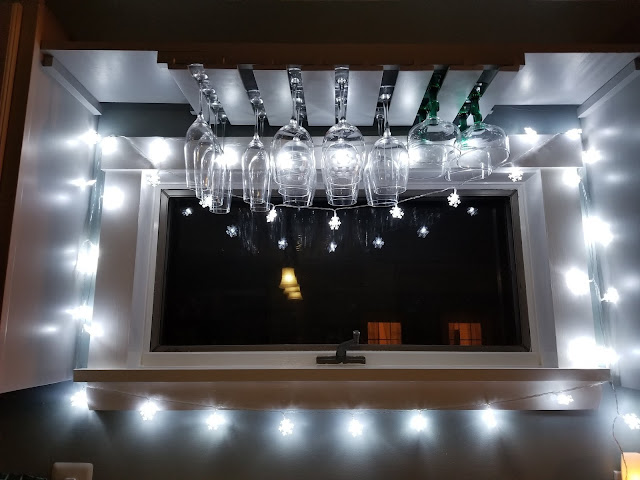 I did find the time to start decorating for Christmas. I'm going to leave these snowflake lights up well after the holidays. 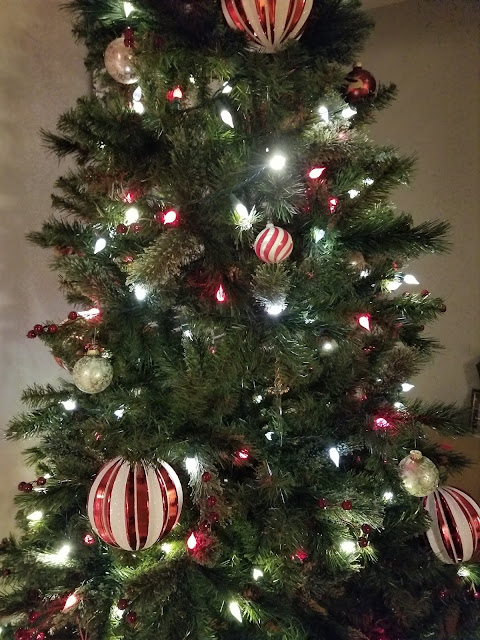 Let me tell you the story behind these GIGANTIC ornaments. I thought they were normal sized and well as you can see they are not. Derek hates them, they're growing on me. When I found the box on the porch I could tell someone had opened it to see if there was anything worth taking and they decided they didn't want some giant ornaments. None of my other packages have been touched since we moved in. Now I'm paranoid about my packages being stolen. It's not a bad neighborhood at all but I guess it is the season for porch pirates. 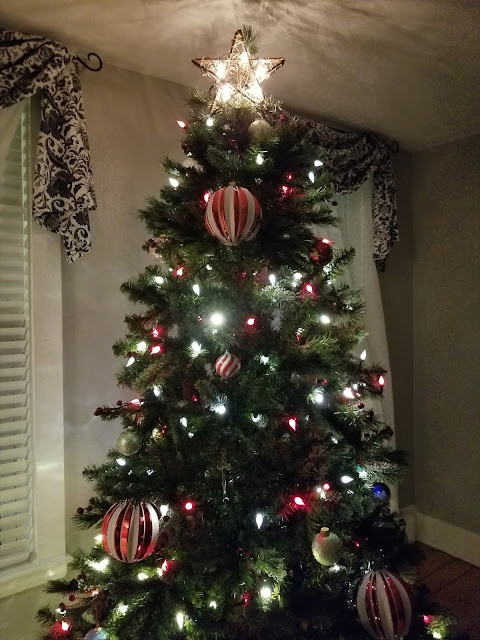 My mom gave me the tree. She said it was too big for her apartment. My living room ceiling is not low so I think you have an idea of how tall this is. Currently our living room doesn't have any furniture. The couch is backordered until February (ordered in September!). We do have a finished basement where our old futon and loveseat is so we're not completely seatless. Maybe in a future blog post I'll talk about how my wall got damaged by a dresser delivery. 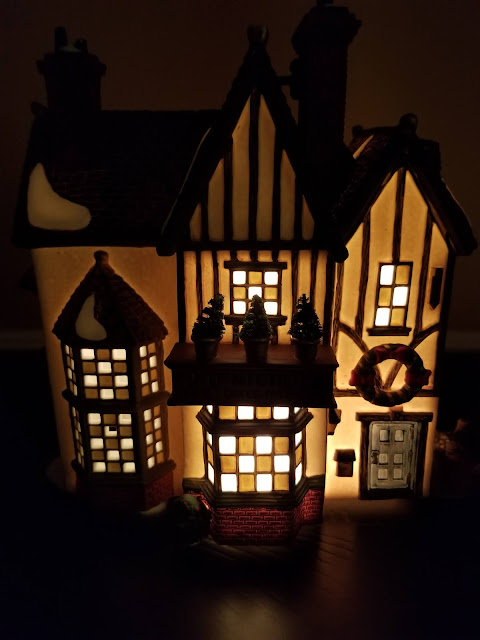 Another decoration from my mom. It's in the dining room on the sideboard. 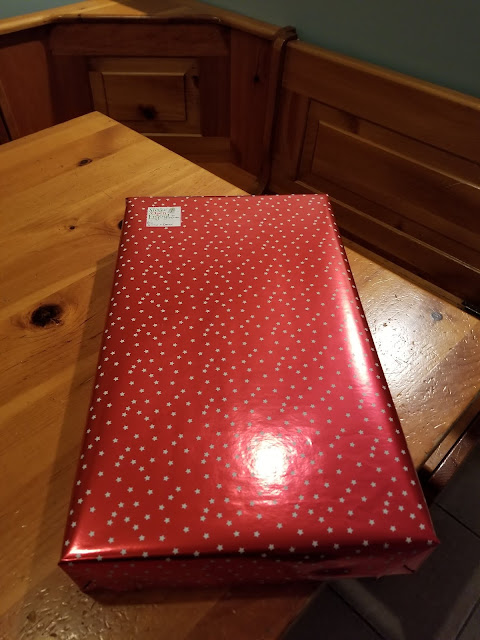 Very proud of how this wrapping job came out. This is a Lego set for my nephew. I need to mail out my gifts this week. Christmas is really sneaking up on me. Wasn't it just Thanksgiving? This table is in the kitchen and was left by the previous owners which was very nice of them considering how long it took for our dining room set to be delivered. 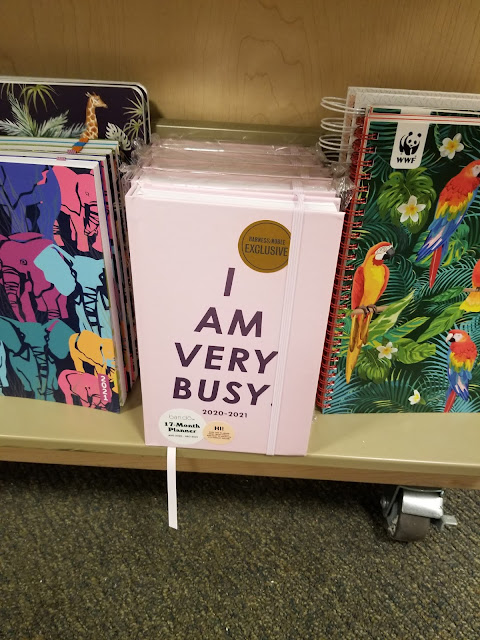 Yeah, pretty much sums up the past few months. I took this photo in Barnes & Noble to send to someone as part of a little inside joke.

I know I didn't show many photos of the actual house but I'll post more once I feel like things are more put together. It's an old farmhouse built in the 1860s. I was actually shocked when I saw the year it was built on the listing. There's been some renovations done by prior owners but if you look closely you can tell that it's an older house. The first night in the new house we thought we heard knocking at the back door when we were in the kitchen. Turns out it was either the washing machine or a ghost. There was no one at the door.

One of the falcons came to visit me at work. I went to sit down at my desk and saw him (or her) hanging out outside my window. The nest is two floors above my office. Probably just wanted a break from the kids. 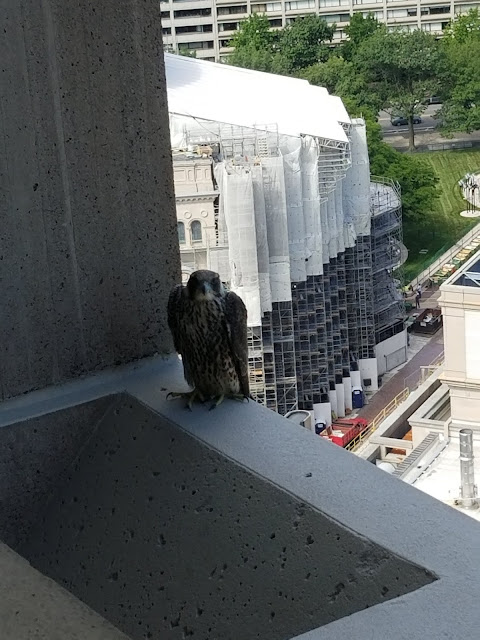 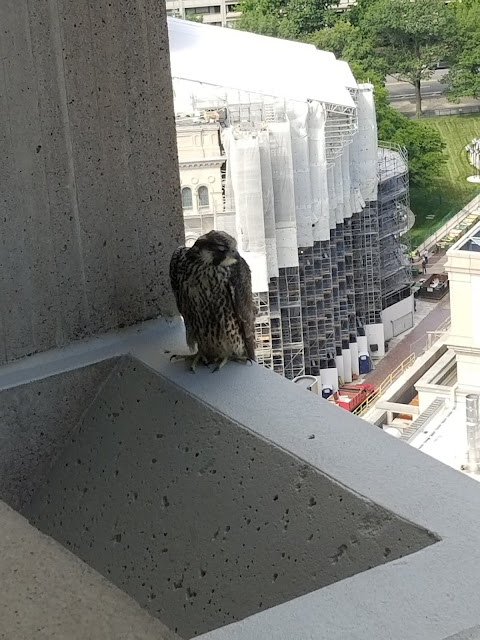 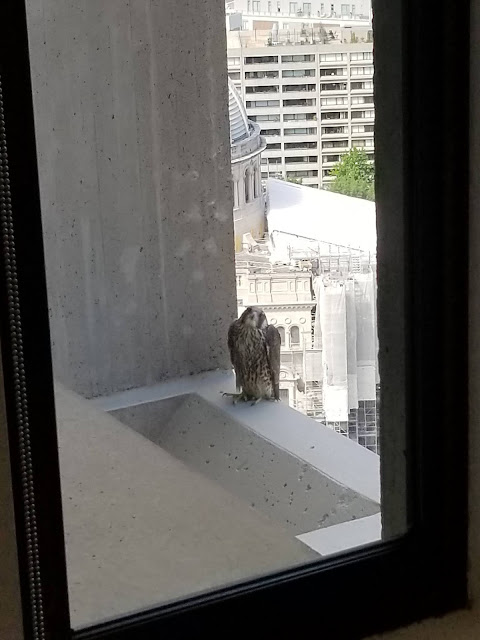 Let's go for a walk

Although I live in a part of Boston nicknamed Rat City I live right on the border of a very nice town. People have yards and actual gardens. It's a much nicer area to walk in so let's go. 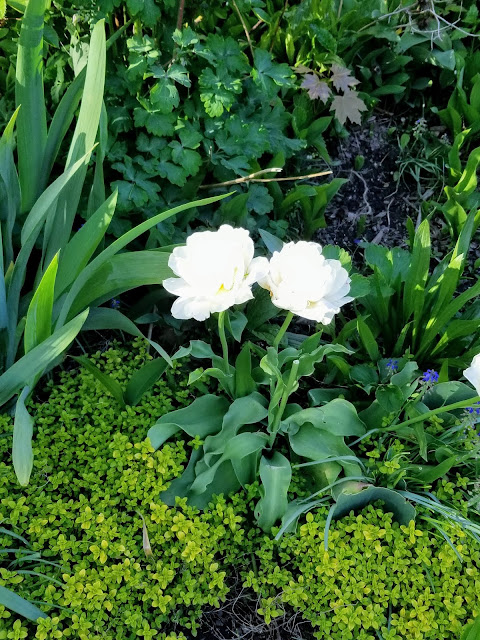 All the greens! Very nice. 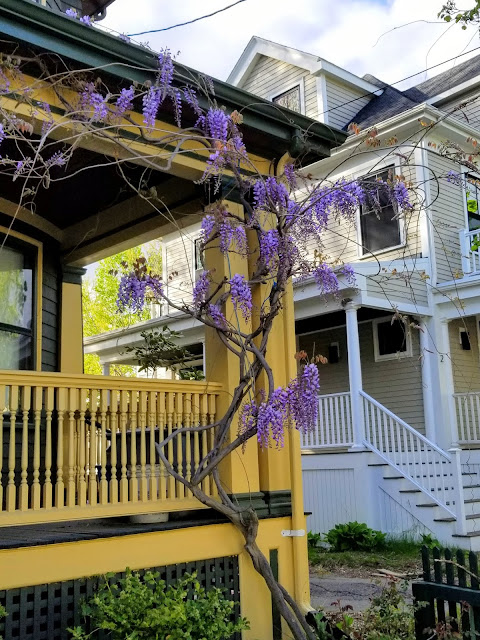 Hmmm is this Wisteria? I need a plant expert on this walk. 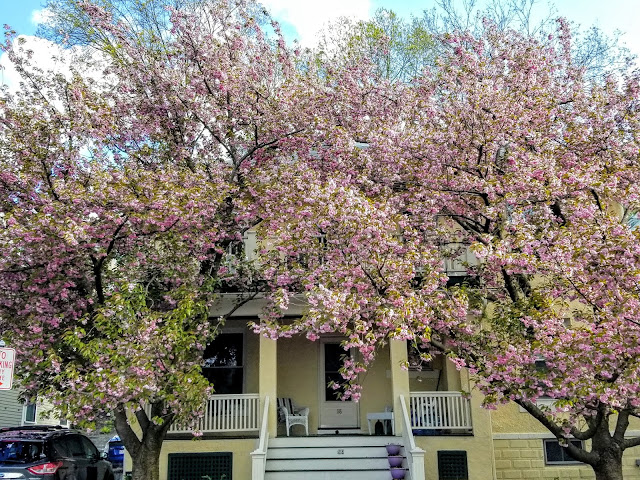 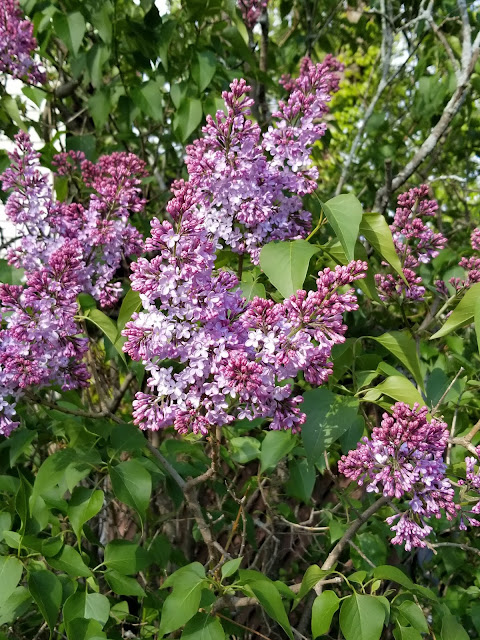 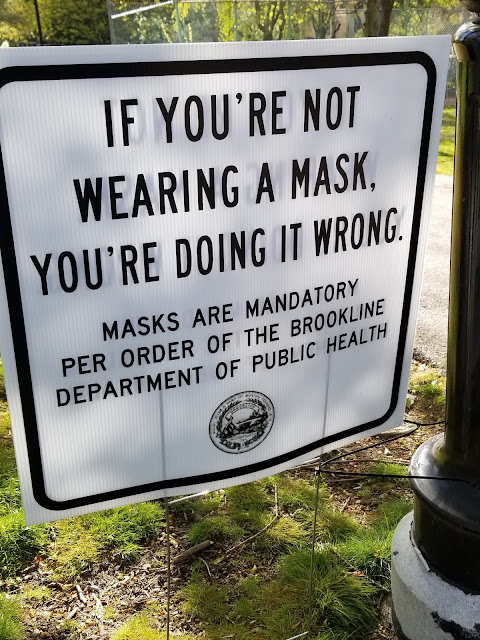 Email ThisBlogThis!Share to TwitterShare to FacebookShare to Pinterest
Labels: nature

Sorry to interrupt your snack 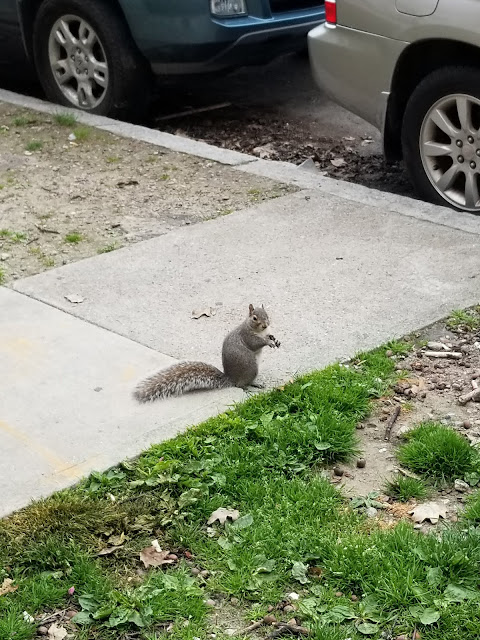 Thanks for the photo Mr. Squirrel.
Posted by Ginny at 9:49 PM 2 comments:

This painting has been hanging in the laundry room of my building since we first moved in. 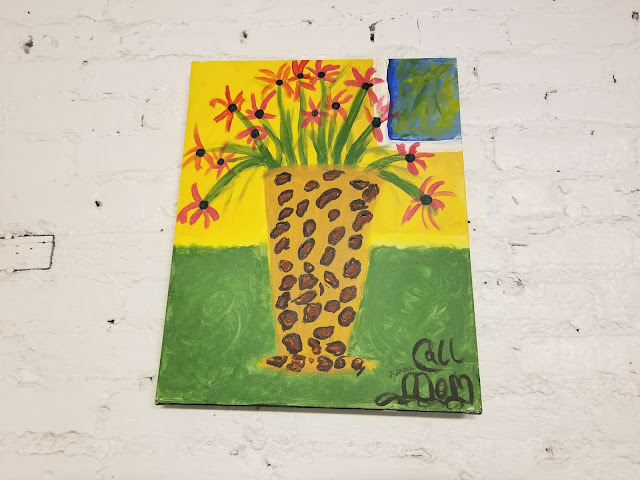 Pretty nice right? You have some flowers, a leopard print vase... 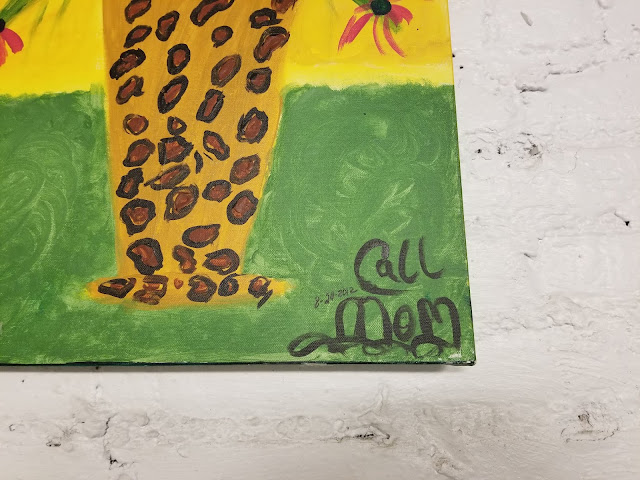 and a reminder to call your mom!
Posted by Ginny at 4:17 PM 6 comments:

Email ThisBlogThis!Share to TwitterShare to FacebookShare to Pinterest
Labels: art

There's nothing I want more right now than to enjoy a burger and fries in an actual restaurant. I'm missing our regular date nights and just being out in general. It's even starting to get to Derek (I admit I started complaining long before him). We still try to have a "date night" to break up the monotony. Our go-to quarantine date night is making White Russians and playing Rummy. I think I've gotten pretty good at making them. I like to use cactus glasses because why not? 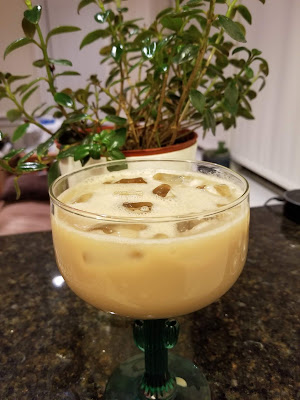 One of these bad boys and you are feeling it.

At this point I expect our third wedding anniversary in May to be celebrated in quarantine. It's a bit of a bummer but I'm just glad that our wedding wasn't planned for this May. I feel bad for the couples that have to change their wedding plans or postpone. Camping is also looking like a distant fantasy right now. Usually our first camping trip of the year is over Memorial Day Weekend. Might have to set up the tent in the living room and play some cricket noises.
Posted by Ginny at 11:46 AM 5 comments: