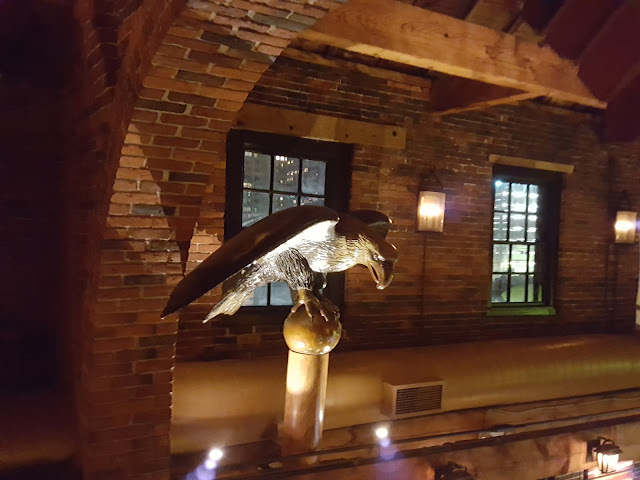 Last night I ate prime rib under the watchful eye of an eagle in the former offices of John Hancock. I feel very patriotic.
Posted by Ginny at 11:46 AM 4 comments: 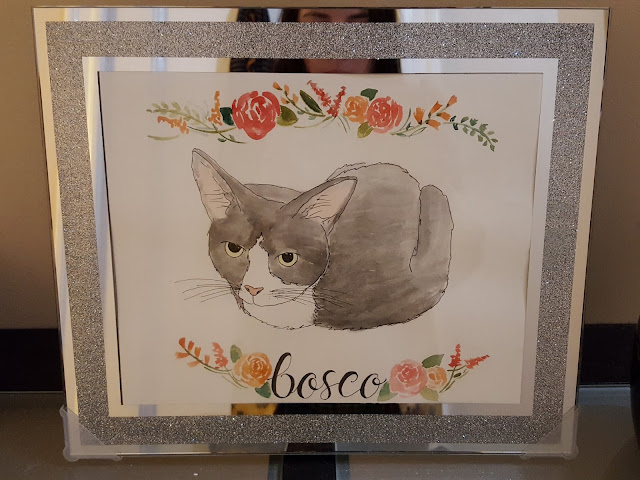 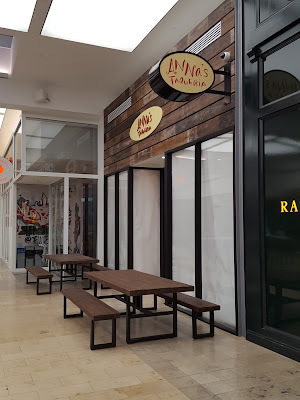 I'm not sure what the hold up has been but it looks like Anna's Taqueria in the Prudential might be opening soon. It was supposed to open in the winter of 2016. I can't seem to find any information online about the actual opening date but with the front finished and tables added, it can be long now. Bring on the burritos!
Posted by Ginny at 12:51 PM No comments: 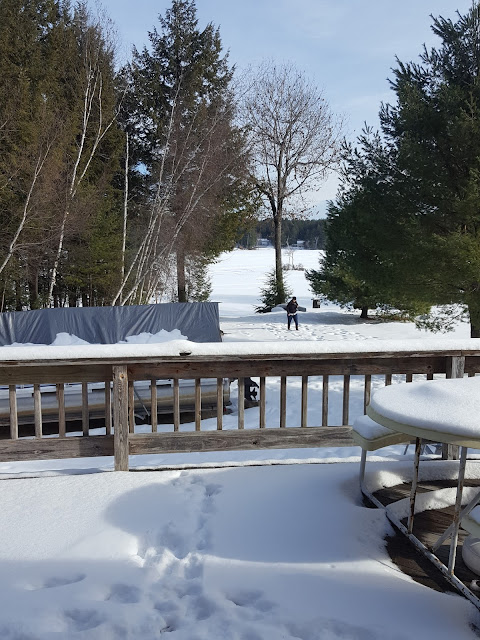 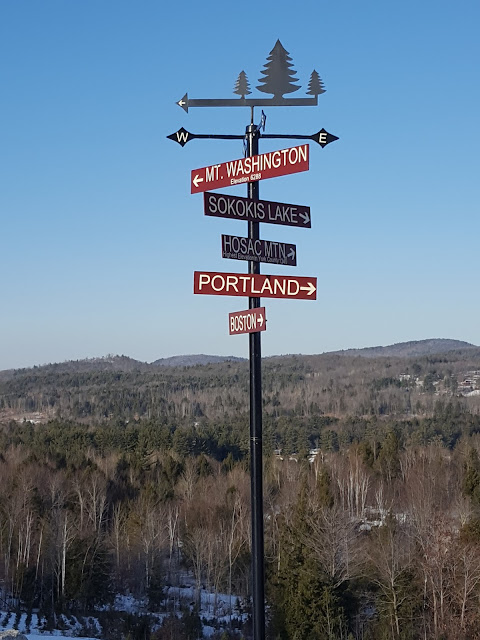 Going back to work today was rough. It was really hectic today so let's relive the weekend which I spent at a chalet on a lake in Maine. 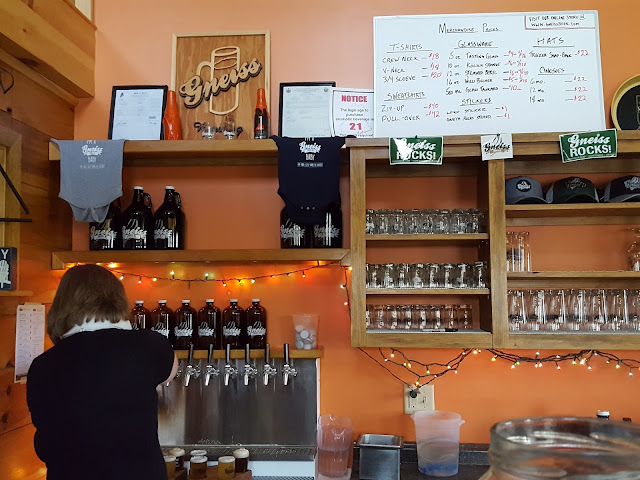 We're hardy New England ladies so of course a girls weekend includes a trip to the local brewery. 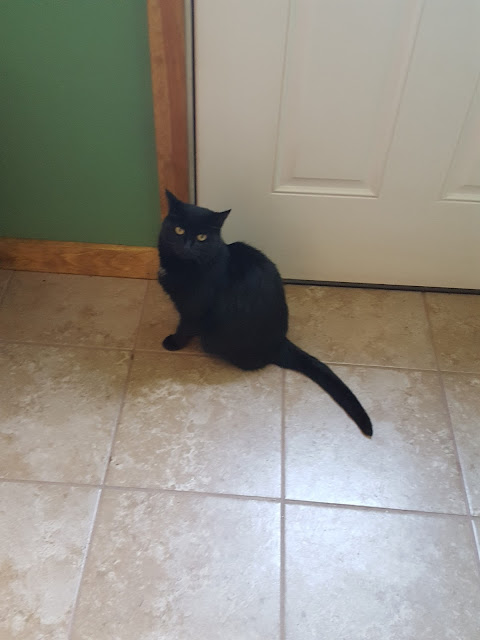 There was a brewery cat! I was pleased. 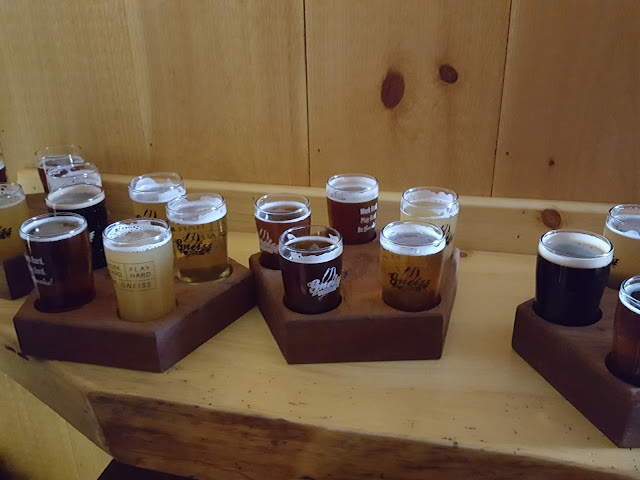 My favorite was the Sonnenschein which is a Kolsch style beer. 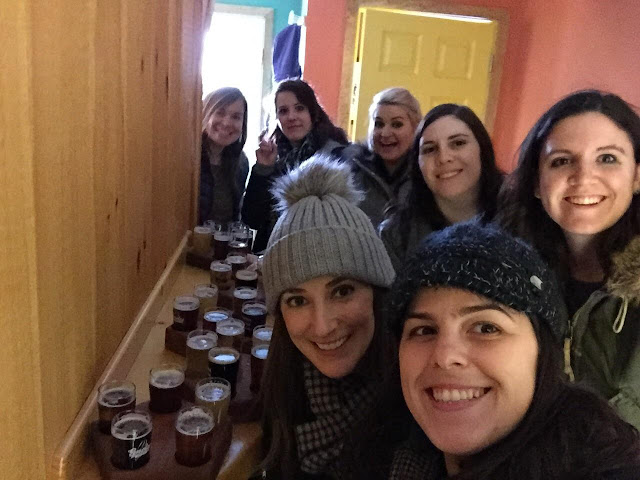 Terrible angle for me but it's the only group shot. I like to keep it real. 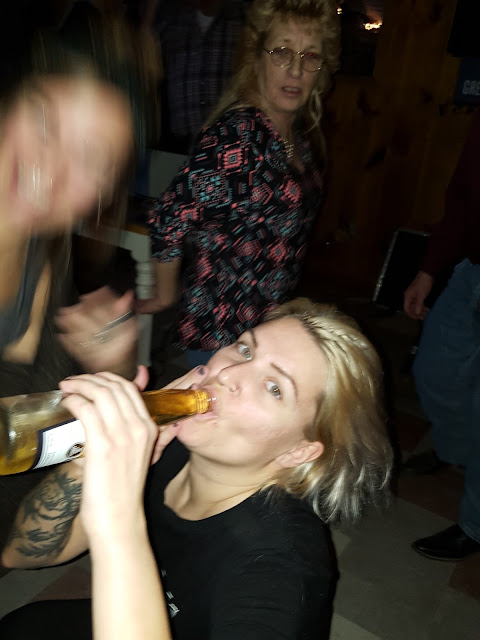 Where's my prize for photo of the year? The woman who looks a bit surprised had a glorious mullet. We were all impressed.
Posted by Ginny at 11:30 PM 1 comment:

Boston you're my home 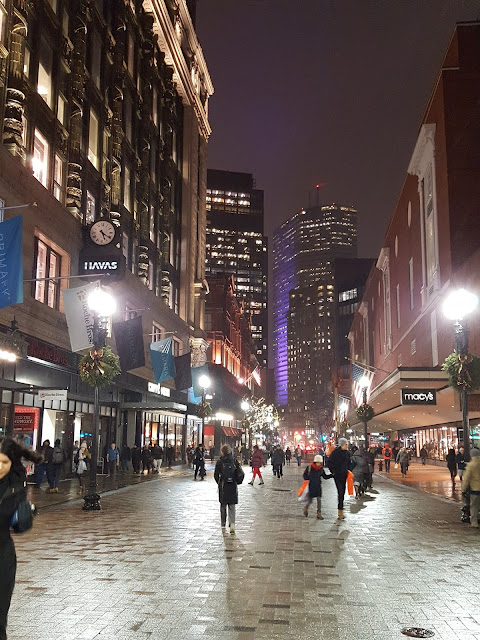 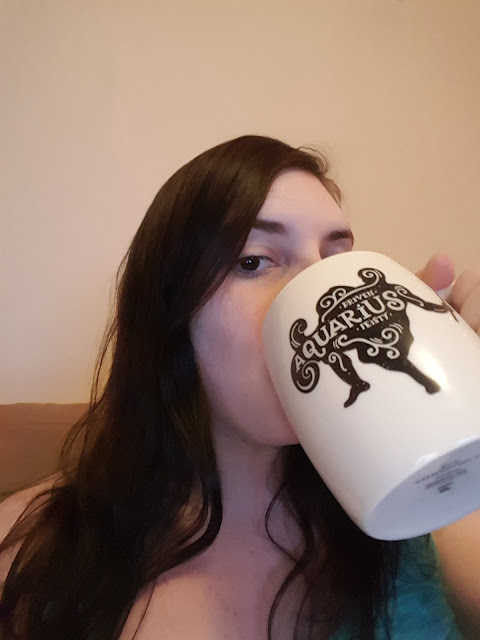 They forgot weird.
Posted by Ginny at 3:19 PM No comments:

Email ThisBlogThis!Share to TwitterShare to FacebookShare to Pinterest
Labels: Aquarius, me

After Saturday's city and bar hopping Sunday was decidedly more low key. I spent the day reading and watching Netflix. I've read three books since January 1st so I'm well on my way to my goal of reading 30 books in 2018. In between my reading I watched 47 Meters Down on Netflix. 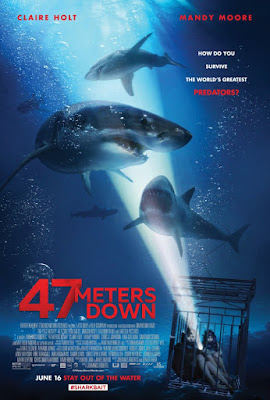 There is no way I would ever get into a cage to swim with sharks and scuba diving also freaks me out. Relying on a tank for air when you're deep underwater would make me feel claustrophobic. You can imagine my blood pressure during this movie. I'll stick to hotel pools and staying on the beach thank you very much.

Besides my reading goal of 30 books I've also decided to blog more in 2018. I was going to be really ambitious and attempt to blog every day but realistically I know that's not going to happen. I think I'll aim for a solid 3 days a week and see how it goes.
Posted by Ginny at 6:56 PM 2 comments:

We had a busy day yesterday that included a trip back to my home town of Waltham. I picked up Bosco's ashes at the vet. They also include a paw print in cement with his name on it. It's a nice keepsake. I did get teary unpacking the urn and the paw print. I miss him and the apartment still doesn't feel right with out him.

Since the vet is not far from my home town we decided to have lunch at Jake n Joes and then go food shopping at Market Basket.

The food was good and the red sangria was even better. After lunch we braved Market Basket. We don't have a Market Basket near us and I'm still amazed at how much cheaper groceries are there. The only downside is how busy it is. This plaza didn't exist yet when I lived in Waltham which I'm a little bitter about. It's close to where I lived and would have provided more restaurant and shopping options.

Saturday night we went to Golden Temple for some dinner and dancing. Derek doesn't like to dance but there's beer to keep him entertained. The music was a little odd. There was a lot of lesser known 90s music and I'm pretty sure Despacito was played 3 times. I did get some dancing in though.

The crowd is always interesting at Golden Temple. There was one guy who looked like he came straight out of an 80s hair band. He had acid washed jeans and one long earring. I used my cousin Lauren to try to get a picture.

Our last stop was Washington Square Tavern. One of the guys at the bar said he used to work there and remembered me and Derek. I didn't quite remember him but I had had a few beers at that point. The bar was pretty dead which was nice after Golden Temple.

The rest of my long weekend will be a little more low key but I'll take the extra day off.
Posted by Ginny at 10:24 PM 4 comments:

Well, we've already had our first big storm of 2018. The predictions for this storm were all over the place. By my very precise measurement of how high the snow comes up on my boots I think we got about 15 inches. I love a good snow storm (when I don't have to work of course). I spent the day reading, napping, snacking and watching the US Figure Skating Championships. Because I don't have a car and live in an apartment building I don't have to shovel and can enjoy my relaxing snow day.

Tomorrow's commute is sure to be a mess. The temperature is going to drop very quickly and all this snow and in some cases flooding is going to freeze. The MBTA is not known for handling storm clean up well. At least tomorrow is Friday.