Don't You Just Hate It

When you fall in love with a pair of shoes and then you look at the price and they're $698.00. 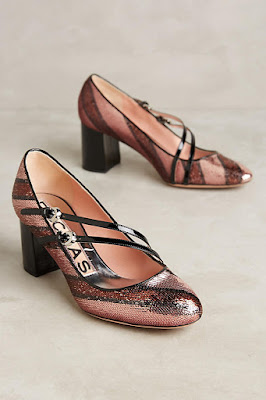 I'll just have to admire you from afar Rochas Sequined Double-Strap Pumps.
Posted by Ginny at 12:40 PM 2 comments:

Email ThisBlogThis!Share to TwitterShare to FacebookShare to Pinterest
Labels: fashion

A Taste of Spring

When it's in the 70s in February you need to spend as much time outside as possible.
You also need a friend who has a fire pit in their backyard. 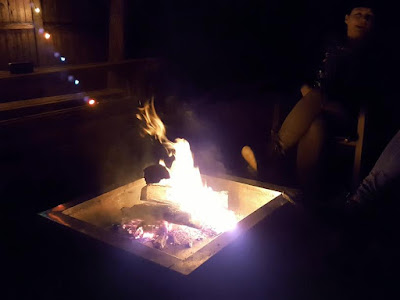 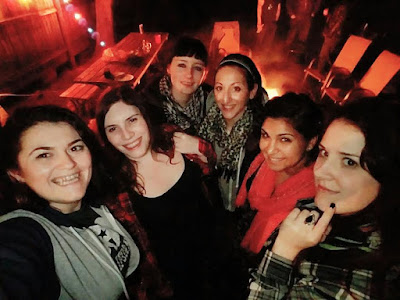 The only thing lovelier than this weather are my friends.
Posted by Ginny at 6:47 PM 2 comments: 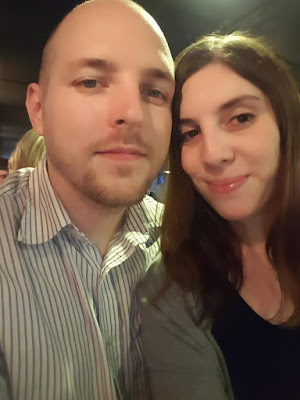 Last night at the Red Hat.
Derek had a burger and I had a fish sandwich.
We both had waffle fries, which are the best kind of fries in my opinion.
Thank you Red Hat for being consistently delicious.

Email ThisBlogThis!Share to TwitterShare to FacebookShare to Pinterest
Labels: us

Our new fridge was finally delivered today! The installation didn't go quite as planned but everything eventually worked out thanks to having a handy landlord.

The fridge was installed within minutes but when the deliveryman went to open the fridge door it wouldn't open all the way. The door was hitting the baseboard which was preventing it from opening. The deliveryman told me that this was the smallest fridge they had that wasn't a mini fridge. I'm not sure if that was true but I let Austin (our landlord) know what was happening. Rather than searching for a new fridge or destroying the baseboard, Austin just changed the side that the fridge door opens on. Problem solved!

I've really missed having a home cooked meal. There's only so much takeout you can eat before you get sick of it. Don't forget to thank your fridge tonight.
Posted by Ginny at 10:33 PM 5 comments:

I felt like I was going to pass out on the train this morning. It was terrible. I started feeling really hot and dizzy and I told Derek I needed to get off and sit down. Once I was off the train and sitting on a bench I started to feel better. I think the cold air helped. I feel fine now but that was not a fun way to start my morning.

Our fridge is dead. Gone to that big old junkyard in the sky. We have a mini fridge coming tomorrow and a new fridge arriving on Tuesday. We're roughing it for now, and by roughing it I mean eating takeout. We had to toss all our food

Tomorrow is my first dress fitting. I don't think too many alterations are needed. I still haven't found shoes yet but I figure I can just bring a pair of heels around the height that I want. No tall heels for this girl. I usually wear flats unless it's a special occasion and I'd say my own wedding is a special occasion. I've also finally started our wedding registry on Amazon and Crate & Barrel. It's fun adding things. Somebody please get me the salad spinner. I'm serious!

I have Monday off and many fun things planned for this upcoming long weekend. My brain is already in weekend mode.
Posted by Ginny at 11:51 AM 6 comments: 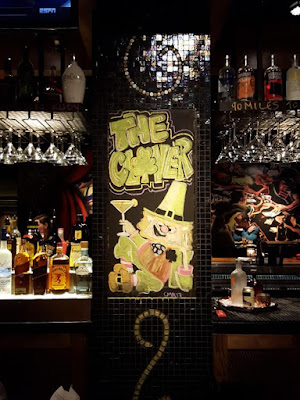 Not sure what's in his drink but he seems pleased.
Posted by Ginny at 5:00 PM No comments:

Email ThisBlogThis!Share to TwitterShare to FacebookShare to Pinterest
Labels: drink

It's pretty rare for my office to close due to snow, so when I heard we were getting hit with a storm on Thursday I planned to be ready to go for work. I woke up the morning of and hadn't heard a peep from the office so I left Derek snoozing away since he was working from home and headed off to work. I trudged through the windy streets of Boston and picked up a bagel to eat for breakfast. I get to the office and notice that all the lights are off. That's a bit strange because it was almost 9 and usually someone has arrived to turn on all the lights by then. I started to have a feeling that something was off.

I walked around the office turning lights on and saw that our accounting guy was in. I asked him where everyone was and he asked me if I got the text saying that we were closed. As you can guess, I did not get the text. I was a little peeved at this point but decided to eat my bagel first before I headed home. I texted my boss to let him know that he forgot about me. He asked me to call him and he explained that his text would not go through to my phone so he emailed my personal email to let me know the office would be closed. I usually don't check my email at night before I go to bed and I don't check it until I'm at work in the morning so I didn't see the email. I could have been curled up in bed all nice and cozy.

I decided to make the best of the situation and stop at the supermarket to get some food. I made it home before the snow got really bad and I even took a nap. Not the perfect snow day but a snow day none the less.
Posted by Ginny at 7:28 PM 4 comments:

As you may have heard the Patriots won the Super Bowl. I'm not a huge sports fan but I'll show some hometown pride, especially if your boss let's you slip out of work for an hour to check out the victory parade.
The parade was supposed to start at 11 but they got off to a late start. After a half hour of waiting in the sleet and snow the duck boats finally started to make their way down Boylston Street.

As soon as the last duck boats were in sight I made my way through the crowd to get back inside to dry out. My coworkers followed a few minutes later. My coat was pretty much soaked through. Luckily I have a heater at my desk and dried off pretty quick.

Tomorrow it's supposed to be 55 and Thursday we're getting a foot of snow. Always a fun time with New England weather.
Posted by Ginny at 8:40 PM 2 comments:

Happy birthday to me! 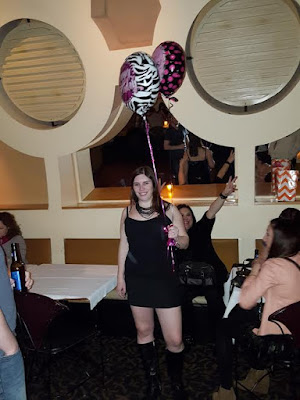 Last night was my birthday party at Golden Temple. It's becoming a tradition at this point. Every year I think maybe I should switch it up and try something different but everyone seems to have a really good time.

Let's be honest though, the food is also a major factor in choosing Golden Temple every year.

After dinner it was time to hit the dance floor. The DJ was pretty good and played all of our requests.

No one would let me pay for my food or drinks despite me trying to pay a few times. They spoiled me with cards, gifts and balloons. What can I say? I have amazing friends.

My mother decided to join the festivities as well. She wanted to get out of the house for a bit in the hopes that her new cat Brighten aka Brighty would come out from under the couch and eat. The good news is he did. He's still hiding most of the time but hopefully he'll get settled in soon and start coming out more.


I woke up this morning a bit tired but otherwise feeling fine despite all the drinks consumed. I'm declaring the night a success.
Posted by Ginny at 4:51 PM 4 comments:

Eat it and weep 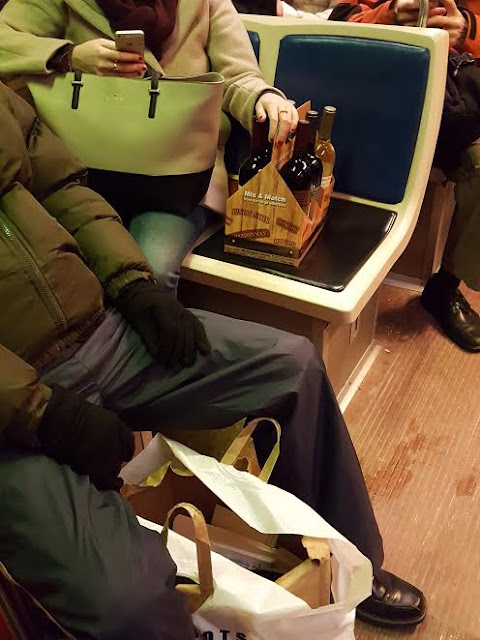 The rage I felt when I saw this on the T. It was a full train, no empty seats and people standing. Move your wine! I tend to go the passive aggressive route so I shot some dirty looks her way and posted this photo on Twitter and Facebook. The internet appeased me by validating my outrage. Of course I could have just asked her to move the wine so I could sit but I'm not really the confrontational type. So internet shaming for your winespreading it is. 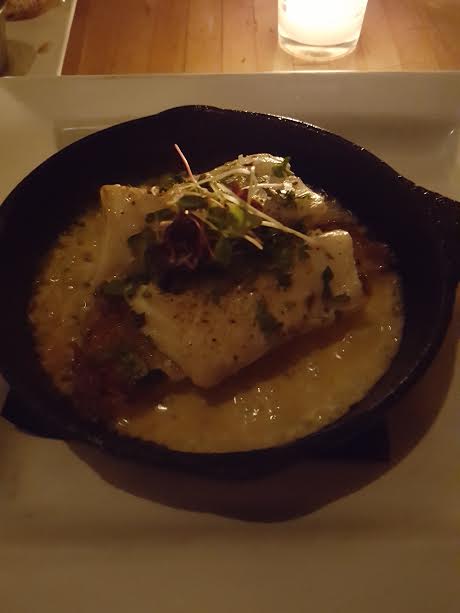 Early birthday dinner date with Derek at the Abbey. I wanted everything on the menu. I went with the roasted cod with a potato scallion pancake in a shallot cream sauce. No regrets in that choice. I could have eaten two servings. 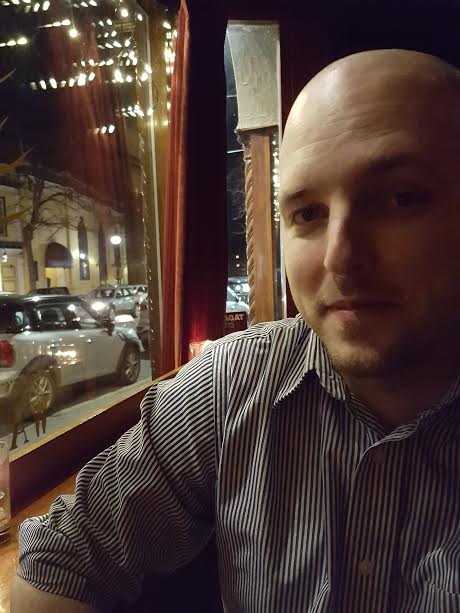 After dinner drinks at the Tavern. I love sitting in the window seats and people watching. I don't remember taking this picture of Derek but I like it. 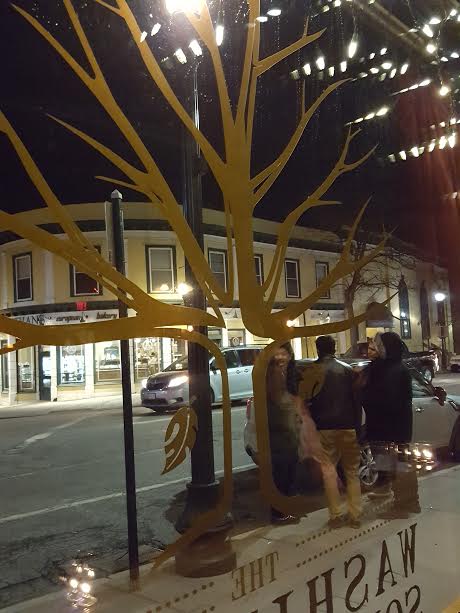 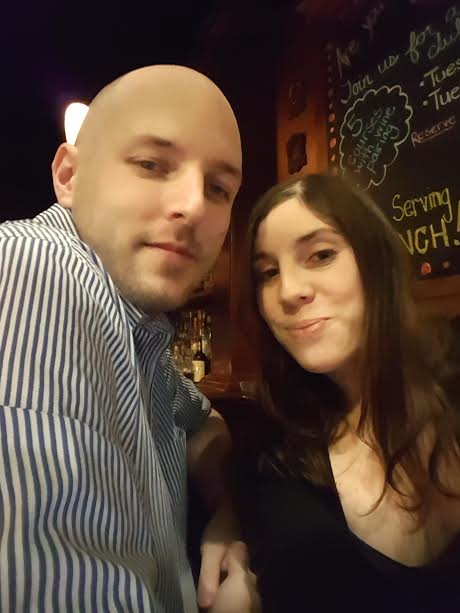 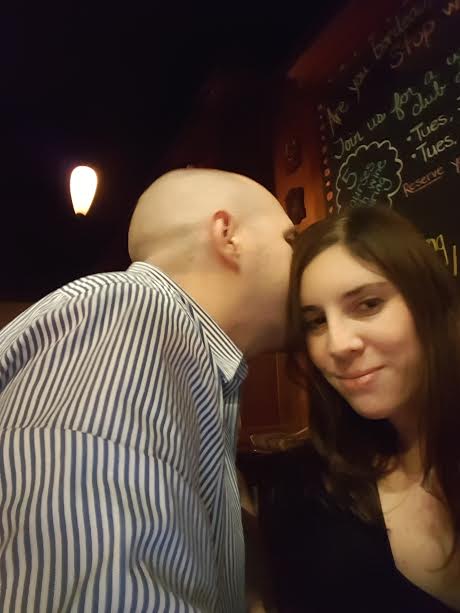 We bought beer and wine at the store on the way home but didn't end up drinking it. Probably for the best as it was a school night.

I'm being good and staying in tonight making blog posts in preparation for my birthday party tomorrow, which is my actual birthday. I'm going to eat so much Chinese food, it's going to be glutinous glorious.
Posted by Ginny at 10:47 PM 4 comments: