What I did on my Vegas vacation 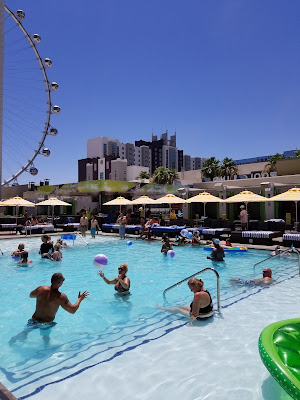 Stayed in the pool all day with a frozen drink.
Had my first In-N-Out burger (it was so good!)
Rode the High Roller.
Lost my sunglasses, bought a new pair, found lost sunglasses.
Lost $20.00 on a slot machine.
Went to the Neon Museum where I petted not one but two cats.
Went to a bar in Old Vegas that made me feel like I was in Hogwarts.
Watched the Greatest Showman twice on the plane.
Had the best time with my girls.

The hotel ghost is also a fan of TLC

We're back from our weekend on the Cape. I wasn't in the blogging mood yesterday after dealing with Sunday Cape traffic but now it's time to regale you with tales from my weekend.

The plan was to arrive early on Friday and spend some time by the pool. It ended up not being warm enough for that so we lazed about the hotel room until I convinced Derek we should just go have an early dinner. We ate at Kelly's 134, which we liked the last time we were in West Dennis. The food was meh this time around but the service was good. We moved to the bar and had a few drinks. It seemed like it was mostly locals. It was a nice low key night.

Now let me tell you about our haunted hotel room. Saturday morning Derek tells me that the tv turned on by itself twice. I slept through the first incident and was in the shower the second time. Then the smoke detector goes off in our room for no reason. Derek doesn't believe in ghosts but I say the evidence points to a friendly ghost who enjoys watching TLC.

Saturday morning we left the ghost and played a round of minigolf at Pirates Cove. I actually won for once. I have to document that because it doesn't happen often. After minigolf we took an Uber to Susan and Jason's house for their wedding celebration/house warming BBQ. I ate my first red snapper hot dog. Apparently it's a Maine thing? It was a hot one but the drinks and sunblock were flowing.

Sunday morning we checked out of the hotel and met up with Derek's parents for lunch. They just so happen to live on the Cape so it worked out perfectly. We got our seafood fix and were sent on our way with a new frying pan and more food!

I ended my weekend by watching my favorite guilty pleasure, 90 Day Fiancé. It's terrible and I love it. I was reading the live Reddit thread tonight and laughing so hard Derek had to come in and check on me to make sure I was ok.

Remember when Luis accused Molly of being a Christ-hating witch? And their relationship somehow survived and kept on going for months? Pepperidge Farm remembers.

The way mother Chantel speaks, it makes it sound likes she’s reading her lines off of a TelePrompter.

Congratulations you are now under investigation.

This will only amuse you if you watch the show so get on that and come back and laugh with me.
Posted by Ginny at 11:08 PM 2 comments: