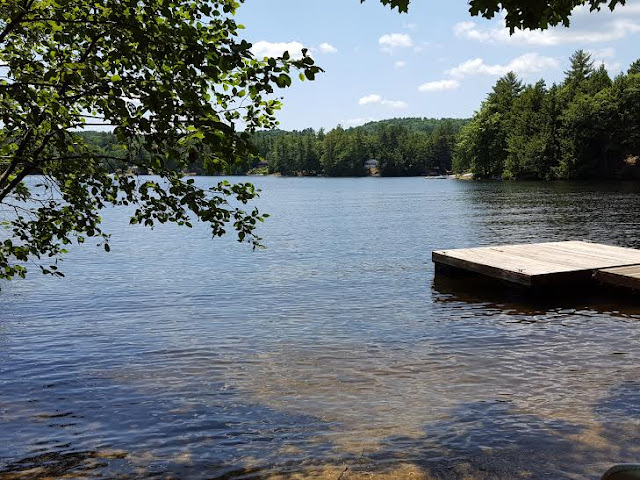 We had ice cream. 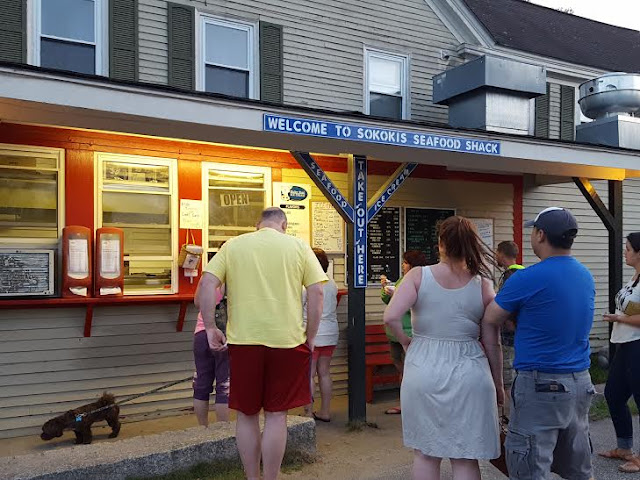 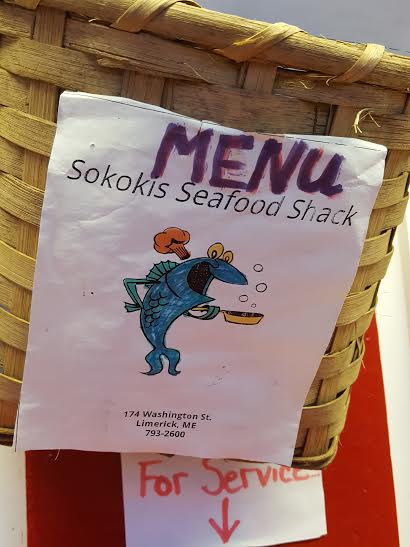 How does he get his hat to just float there? 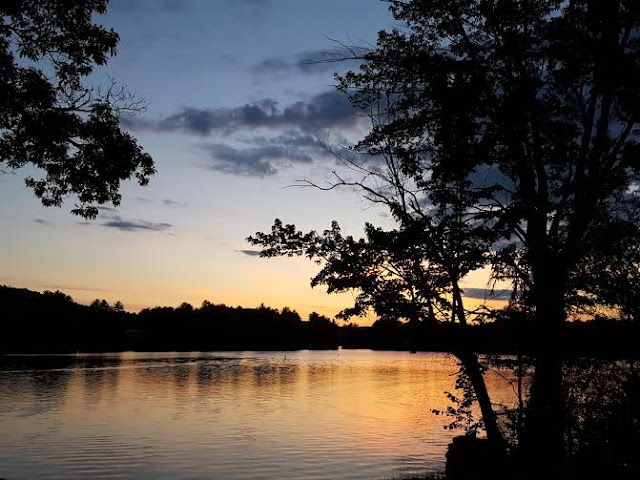 And now I'm back home wishing someone would buy me a lake house.
Posted by Ginny at 1:08 PM 2 comments:

I'm heading up to Maine this weekend after work. Fiona is picking me up since I am carless. They just got a new boat, Fiona's got Spotify and the weather is going to be perfect. Now I just have to stop looking at the clock.

And if you see something on a dock in Maine that's blinding white, that's just my pasty white skin glowing in the sun and blinding everyone within a 5 mile radius.

I read an article where a blogger announced that her ten year old daughter came out at Pride as pansexual. I find it a bit hard to believe a ten year old can really understand what being pansexual actually means. I mean I'm thirty-two and hadn't even heard the term until Miley Cyrus announced she is pansexual. This got me thinking though. How old was I when I realized I was attracted to guys and who was my first crush? Although I can't remember the exact age I know I was in elementary school and I know that my first big crushes were the Jonathan's. 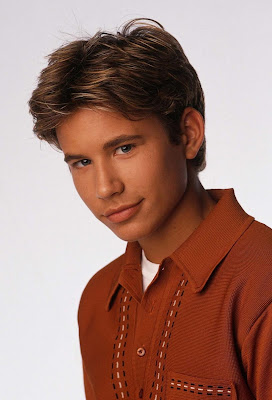 I'm pretty sure every girl my age had a crush on JTT at some point. I loved him in Home Improvement, Tom and Huck, Wild America and of course he was the voice of young Simba in the Lion King. Looking back at photos from Tom and Huck, Brad Renfro was way hotter. 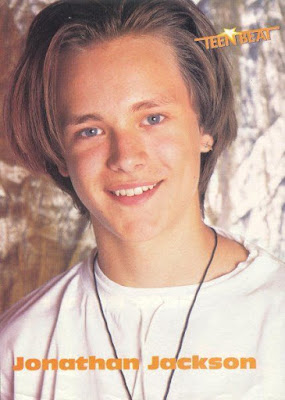 I first saw him in Camp Nowhere in 1994. I instantly had a crush and wanted to go to camp. In 2002 he would star in Tuck Everlasting and I was pleased to see that he was aging well. No one wants to see a crush go south in the looks department. He's still acting, most recently being on Nashville.

Even though he's not a Jonathan, I have to mention Devon Sawa. 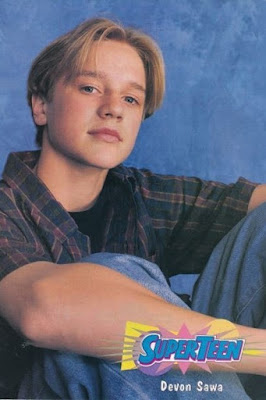 He was in a ton of 90s movies but my favorite was Now and Then. Devon is still acting and is pretty active on twitter. He actually tweeted back at me one time. If you told twelve year old me that, I would have flipped out.

I'm pretty sure I spent most of my allowance on all of those tween magazines like Bop and TigerBeat so I could hang all the posters on my walls. 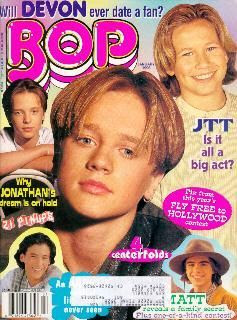 Will Devon ever date a fan?! A girl needs to know!

As for my first crush on a boy that I actually knew in real life, that would be this kid in the Wild Turkey hat. I can't remember his name so let's just call him Jonathan too. I made sure to sit next to him and wore my best dress. 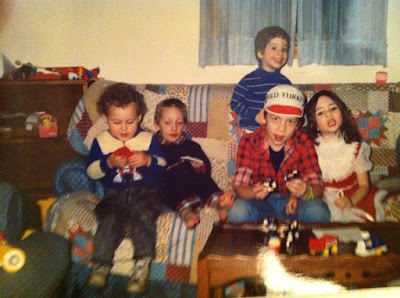 Note my brother behind us getting ready to do something devious I'm sure.
Posted by Ginny at 11:37 AM 5 comments:

Email ThisBlogThis!Share to TwitterShare to FacebookShare to Pinterest
Labels: the 90s

We are Siamese if you please I love this painting and would hang it over my mantel if I had a mantel and if this painting was for sale.
Posted by Ginny at 11:04 PM 4 comments:

Email ThisBlogThis!Share to TwitterShare to FacebookShare to Pinterest
Labels: art, the cat files

Bosco enjoys the view and the breeze. 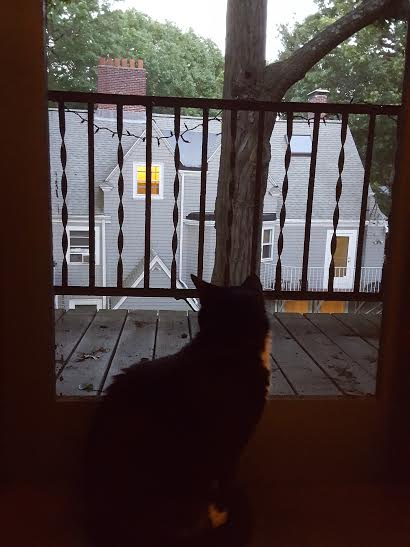 The humans enjoy the porch and an adult beverage. 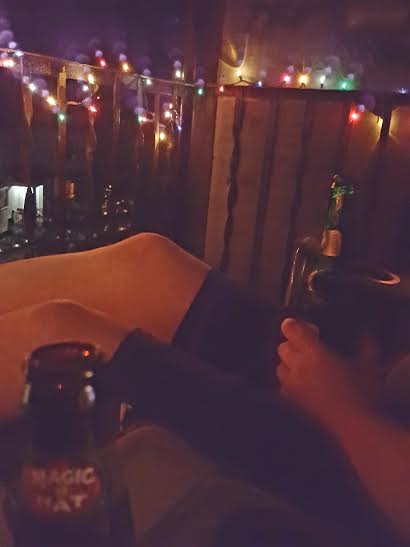 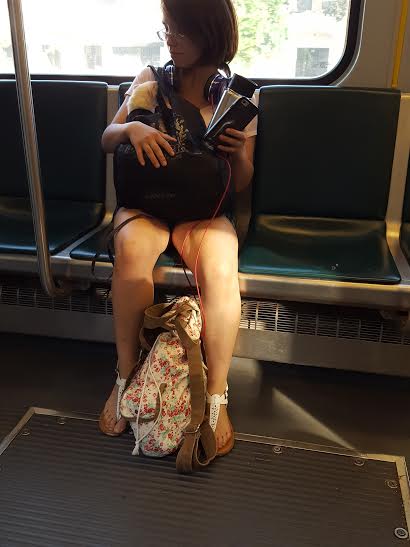 Email ThisBlogThis!Share to TwitterShare to FacebookShare to Pinterest
Labels: animals, the T

Things you shouldn't do when hungry 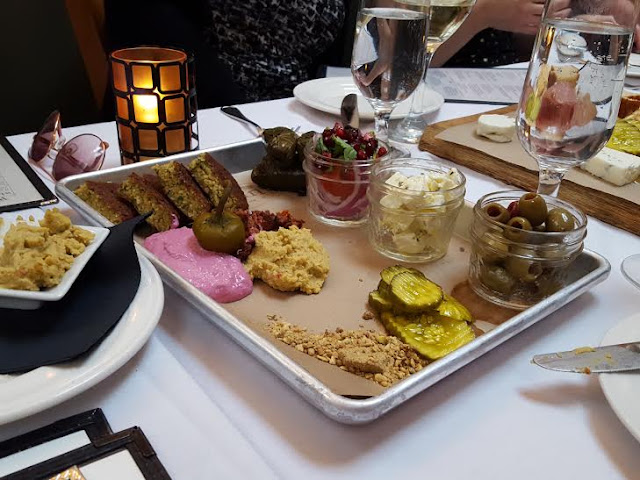 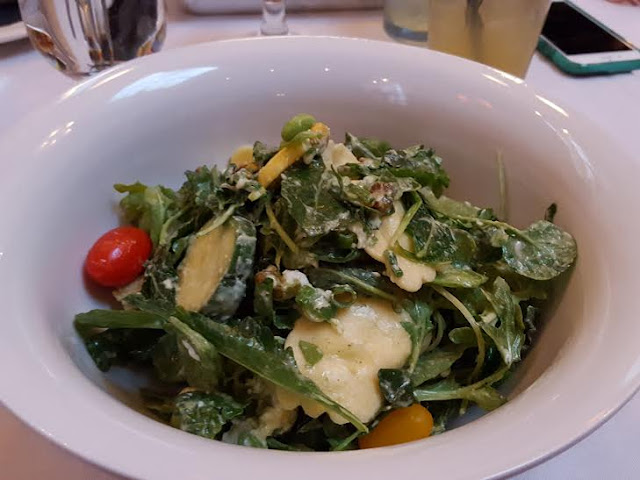 Blog photos of delicious food that you ate the other night.
Posted by Ginny at 12:30 PM 2 comments: 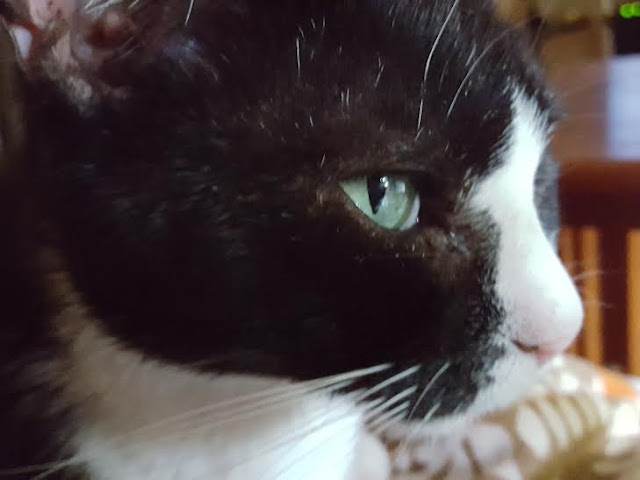 Gets into trash, eats your bread (except for the crust), knocks over lamps, but who could be mad at this face?
Posted by Ginny at 7:49 PM 2 comments:

Email ThisBlogThis!Share to TwitterShare to FacebookShare to Pinterest
Labels: Bosco, the cat files

I told myself I was taking a break from cheese, but then Derek suggested Pizzeria Regina's for dinner.

How could I resist? 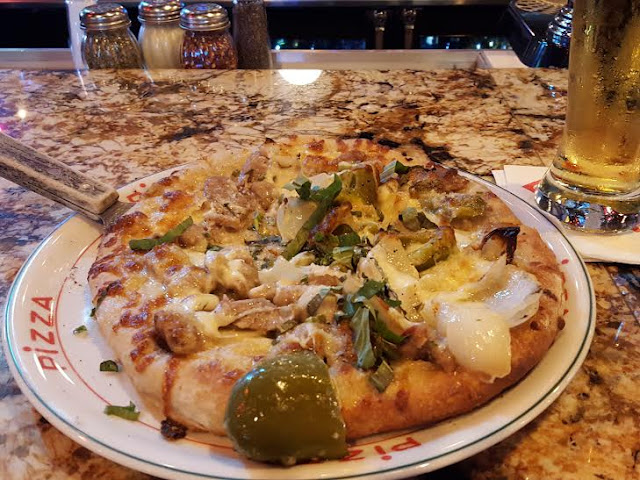 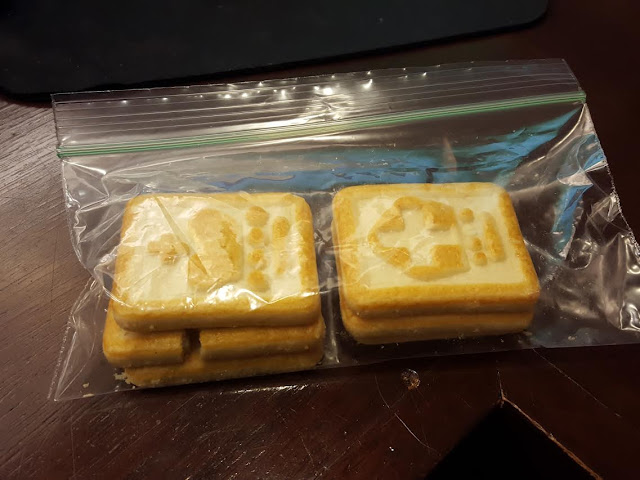 Will do. The fee for my services is one cookie.

I think we could all use a feel good news story this week so here is a baby hawk that was rescued from Route 125 in Andover.

A visit to the Arnold Arboretum 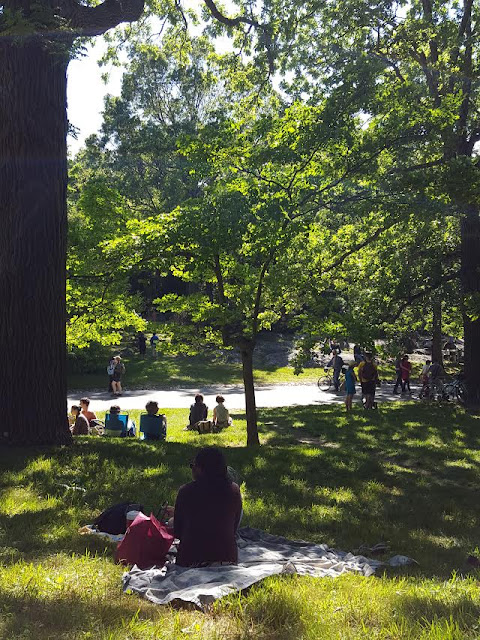 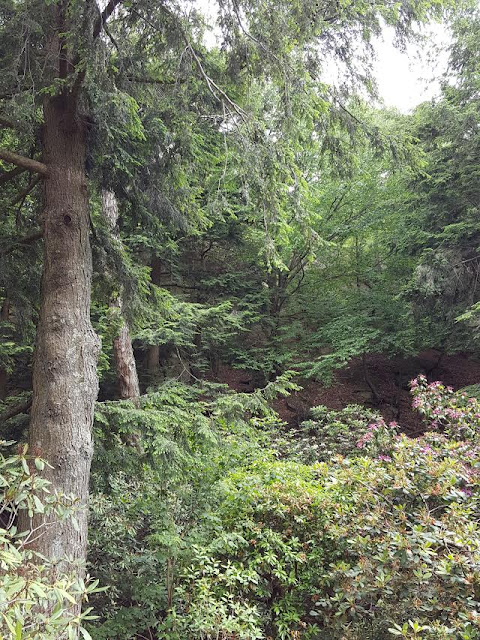 This was my first visit to the Arnold Arboretum. How can that be? I've lived in around around Boston my entire life. I've never seen so many different species of trees in one area.

The Arboretum is 281 acres and is located in the Jamaica Plain and Roslindale neighborhoods of Boston. It was established in 1872 and was founded as a public-private partnership between the city of Boston and Harvard University. The best part is, it's free and open to the public.

Derek's parents invited us to see 'Inuksuit' - which is a massive outdoor instrumental piece. I have to be honest and admit that 'Inuksuit' was a bit too weird for my taste but I did enjoy walking around the Arboretum. I'd like to go back and explore more and take some more photos without a gong and a siren going off.
Posted by Ginny at 11:51 AM 1 comment:

The tickets aren't even for me. My boss asked me if I could try to order tickets to Hamilton for him through this Amex pre-sale. He was going to be in a meeting with a client when the tickets went on sale so he couldn't do it. I said of course, so he gave me all the info and his credit card and I set a reminder through outlook so I would be ready come 10 a.m. I was already logged in and ready to go at 8:58. I click on the date and the area of seats he wants. I think I've totally got this. Then ticketmaster tells me to wait, I'm "in line" and I should not try to open a new tab or I'll lose my place "in line". So while this is happening my boss needs this blank pleading for his client. I ask my co-worker if he can print it out for me because I'm afraid to touch my computer and screw this up. My co-worker helps me out and I don't touch my computer.

Finally something starts happening! I think I've got it! The sale has gone through! But no, it's a too bad so sad you were too slow and didn't get the tickets message. I don't even know how this is possible. I was super fast and I still didn't get the tickets. I guess neither of us is going to see Hamilton.

As a side note, I really despise ticket resellers who buy up all the tickets and then resell them after jacking up the prices. How is that even legal?
Posted by Ginny at 3:45 PM 5 comments:

We're back from our weekend on the Cape. The weather wasn't good nice enough to go to the beach but we did get in a round of mini golf. I lost but I did have an amazing scallop roll so I call that a win.

My cousin's wedding was at a cute waterfront restaurant. It was cloudy but luckily there was no rain for their outdoor ceremony. It was nice to spend some time with my family.

Here we are, all gussied up. 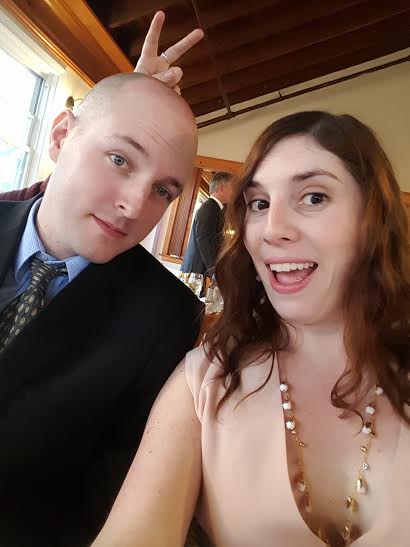 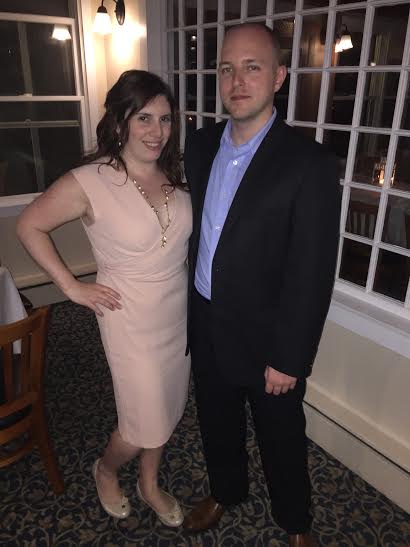 Now I'm off to watch Game of Thrones at Doug and Kerry's. The weekend isn't over yet.
Posted by Ginny at 6:27 PM 5 comments:

Email ThisBlogThis!Share to TwitterShare to FacebookShare to Pinterest
Labels: the Cape, weekend adventures

Let's go to Florida in July

My mom and I just booked our flights to visit my brother in July. It's cheaper to fly down in the summer but it's still an expensive flight due to having to fly into a teeny tiny airport. Luckily I was able to use points to cover a good chunk of the flight. Derek will stay home in Boston with Bosco and hold down the fort.

All I can say is thank God my brother has central air. I'm a delicate flower in the heat, well that's if flowers got heat exhaustion easily.

I finally found a wedding dress for my cousin's wedding this Saturday. It took five stores before I finally found something that didn't look absolutely terrible. That is not an exaggeration, the dresses were terrible. I don't really enjoy shopping in stores. I prefer online shopping. I like to get in and out with what I need. By store #3 I was pretty frustrated but I had to find something. I finally ended up finding a dress at Ann Taylor and it was on sale. Maybe the shopping Gods finally took pity on me.

Can we all agree that dressing room mirrors are really terrible? They are very unforgiving and I felt down on myself for a bit despite liking the dress I bought. I didn't allow myself to mope for too long though. I ate pretty healthy today and went for a walk which made me feel better.

Pictures of said dress and matching jewelry to come. Unless all the photos of me at the wedding are terrible...
Posted by Ginny at 10:17 PM 4 comments: